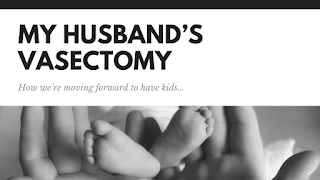 Have you ever decided something in your younger years that you later regret once you’re older? I’m sure we’ve all been there and can relate. I know I have a ton of decisions that my young self made, that I now wish I could take back. Well my husband made a BIG decision in his young mind that we BOTH wish he could take back. Here we are though trying to fix that past decision.
At the young age of 23 my husband wasn’t making the best choices just like a lot of young men don’t. He didn’t think about responsibilities of his actions and decided that he knew for sure he did NOT want kids. He then came to the decision to get a vasectomy. Any doctor that’s in their right mind will not let a 23-year-old make this sort of choice. Somehow, some way though this doctor finally agreed to do the procedure. Fast forward 9 years and his mind was starting to change about his decision to not have kids. Everyone always warned him he was going to feel differently once he was older and wiser. Of course, you don’t want to listen to that advice when in your mind you think you know what you want.
My husband and I have known each other for 16 years. I always thought in my mind I didn’t want kids also… we’ll get more into that another time! So, at the time I learned he had done this, I thought it was great!! I found someone like me that wasn’t wanting to have kids. we would be able to spend our life together doing the things we love, without having to worry about a babysitter and all the other stuff that comes with being a parent. Again, everyone would always tell me “you’ll feel differently once you’re older.”
Well the second I started to hit 30 I finally started to get those urges to be a mom. At this point my husband was already changing his mind about wanting kids also. We had already been researching our options. Let me tell you, all the options we researched were expensive. It really started to make me feel defeated because I knew we wouldn’t be able to just come up with that amount of money easily. We really had to decide how important it was for us to have a child. Which in the end we concluded a child of our own is extremely important. That we were going to do what it took for us to bring that dream to life.
After doing some researching the two options that were going to fit right for us was either a vasectomy reversal or IVF. Both procedures are thousands of dollars but at least the vasectomy reversal was less money than the IVF. We wanted to be able to try the reversal to conceive that way before we tried the IVF route. It’s a very stressful decision to make. You know there is a chance the reversal surgery won’t work and you’re back to square one. Then you have more stress trying to come up with more money to try IVF, but we felt that was the path we wanted to try first. Thankfully we were able to freeze sperm as a backup in case we ever do have to take the IVF option.
For anyone that is going through fertility issues it’s not an easy thing. Just don’t give up hope, there is options out there. I know there’s times where it feels impossible but just know you’re not alone!

Here are some great resources to visit if you need support or more info into different options:

Popular posts from this blog

Wanting to end the decade on a positive note...

December 04, 2019
I’ll start off by introducing myself to you. My name is Ariel, I’m in my 30’s and live in the beautiful Evergreen state! I’m extremely lucky to be happily married to my best friend. We’re currently working on starting a family, which now we’re staying hopeful that it will happen soon. It’s been a bumpy road so far … but we’ll get more into that later. We just bought our first home and we couldn’t be happier. Everything is slowly starting to fall into place the way I’ve always wanted it to. It hasn’t always been on my time but that’s how life works.
Trust me it hasn’t been an easy road that got me here to this moment. For as many ups as I’ve had, I’ve also had to deal with twice as many lows. Everyone has a past of some sort. Some of us might be proud of our past but some of us have many regrets and failures we live with. I remind myself that as much as I wish I could forget those lows in my life, I’ve also learned a TON from it all. My experiences good and bad have helped shape me into…
Post a Comment
Read more

Living with anxiety and why I need to worry less

January 15, 2020
Anxiety. It really is the thing I struggle with most.

I’ve been trying for years to control my anxiety better. I hate going through life being terrified of everything or every little possible thing that can go wrong. It can get embarrassing at times especially around new people that don’t know that’s just me and how I am. What makes the whole situation with my anxiety worse is that I not only suffer form generalized anxiety but also social anxiety as well. I’m a very shy person and new social settings just make me so nervous and anxious. I constantly worry about people looking at me, not liking me or judging me. In all reality that isn’t the case, but my mind makes me believe it is. So, meeting new people really scares me. I’m a major introvert!
I’ve dealt with anxiety for as long as I can remember. Growing up I remember worrying about everything! whenever I was worried about something, I would get horrible stomachaches. It wasn’t until I was older that I realized that was my anxiety. …
2 comments
Read more

Infertility Struggles During The Holidays

December 18, 2019
Have you ever wanted something so badly but it’s out of your control? That’s how I’ve been feeling during this trying to conceive journey. There is only so much that I can control, even though I wish I could control it all on my own. It’s been a big struggle for me lately and has really taken a toll on my mental health. Some days I feel like it’s never going to happen for us and then other days I feel completely positive that it’s all going to work out. Lately I feel like I’m stuck in a rut and I’m not entirely sure how to get out of it.
It’s been especially hard around the holidays this year for a few reasons. One being you must see family that want you to have kids just as bad as you do. So of course, they want to ask, “when do you plan on starting a family” or “any updates yet?” As the months go by those questions get harder and harder to answer. Every time it gets asked all I want to do is breakdown because it’s something I want so badly but I can only do so much. It’s a reminder t…
Post a Comment
Read more

Ariel S.
I've reached my 30's finally! I'm trying to figure out life as I go. Its all a learning process and I'm willing to share my ups, downs, questions and answers along the way.